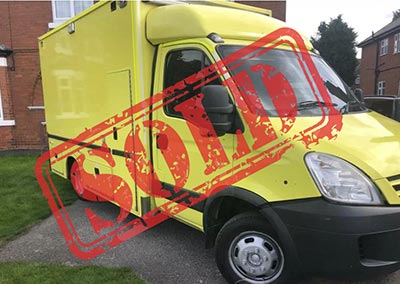 Our initial plan was to convert our ambulance into a mobile beauty studio, unfortunately this proved impractical and as a result we’ve made the decision to sell. We thought that the ambulance might make a good mobile studio as the tail lift provided great wheelchair access but for a couple of reasons the ambulance proved not to be a good choice for us so we’ve taken the decision to sell it (at a small profit!)

Conversion – Before the ambulance could have been used it would have needed to be specially adapted. The vehicle conversion specialists have advised that ambulances are particularly difficult to convert and that a panel van would be a much more practical vehicle for conversion.

Heavy – Due to its weight the ambulance was classified as a heavy vehicle and as such would have needed a special category on each drivers license. We felt that we a vehicle that could be driven by anyone with a standard UK license would make much more sense for a charity with volunteer helpers.

MOT – As a heavy vehicle the ambulance would be expensive to keep on the road, not least vehicles of this type require an MOT test every three months. We felt that the keeping an expensive vehicle on the road wasn’t the best use of the charities funds.

Use our handy news filters to find what you’re looking for quickly. Search by keyword, category or tag.